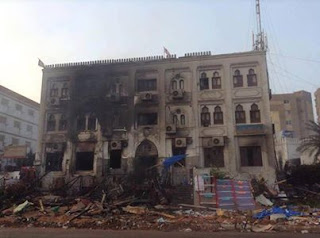 Military putschists committed the unthinkable, monstrous crime. In broad daylight, they set fire to a 6-story building of a field hospital at the Rabaa al-Adawiya Square, in which there were thousands of alive, injured people and dead bodies of thousands of killed protesters.


Doctors of field hospital made a statement on the heinous crimes of the putschists, who indicated that the military putschists tried to hide the facts of the incredible brutality and savagery.

In their statement they, in particular, pointed out:

- At 5:15pm today (Wednesday, August 14) the Rabaa al-Adawiya field hospital building was stormed by the Central Security Forces and special forces units, in cooperation with the army, after shooting heavily and directly at the facility using live bullets, birdshot and gas bombs, causing serious injuries, doubling the number of suffocation victims, and preventing us from performing our humanitarian and professional mission. We had to leave the hospital. 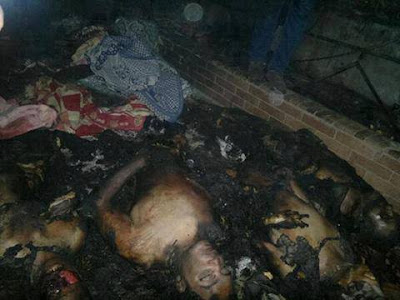 While we acknowledge that what happened is an utterly heinous crime, we hold the terrorist leaders of the military coup and the ministers of interior and defence in the putschist government fully responsible.

We also note that at the time of the intrusion, the hospital - which occupies six floors in a building near the square, as well as several spacious halls attached to the mosque - was packed full of thousands of dead and injured citizens, due to a siege of the hospital by security forces who prevented ambulances from coming through, since the beginning of the violent crackdown.

We warn the attacking forces against interfering with the dead or injured for the purpose of hiding the evidence of their heinous crimes. In this regard, we affirm that we have documented all cases of death and injury, and that we will make those public to the whole world.

It is to be mentioned in this connection that, according to the Egyptian Anti-Coup Alliance, the total number of demonstrators killed by the putschists in Cairo has reached 4,500 people. More than 10,000 people were injured. In doing so, the putschists give much lower figure, and claim that 43 soldiers, including 2 generals, were killed in the clashes.