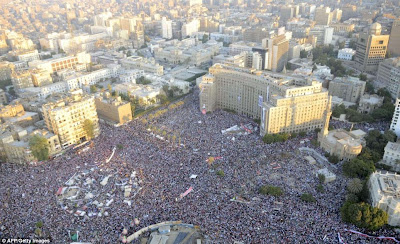 Jumaat 17 Ramadhan More than 100 peaceful Muslim martyred in Cairo and over 1,000 injured at a protest being held by supporters of the arrested legal Egyptian president Muhammad Mursi.

There were pools of blood all over the field hospital. Many of the injured were in bad shape. Some had parts of their head missing - taken out by democratic bullets.

The democratic carnage raged last night and all morning. Automatic gunfire from democratic shooting squads was heard. Protesters formed a human shield around us as shotguns and CS gas were fired by military secularists towards us. There was the sound of outgoing shots too. The air was thick with tear gas and Muslims were vomiting.

There was a child, maybe 12, covered in blood. He was deathly white. They closed the doors at the hospital as they could not accept more wounded, but the ambulances were still arriving.

Early on Saturday, junta's "interior minister" Muhammad Ibrahim vowed to end the sit-in at the mosque in the capital's Nasr City area.

He said local residents the protest would be "brought to an end soon and in a legal manner", meaning a legal manner of the democratic military, i.e. mass murder.

The "minister" said a junta's "prosecutor" would issue an order, but this has yet to happen.

The latest massacre of Muslims by pro-western democrats is the most serious since the army's coup to remove president Mursi.


Muslim Brotherhood spokesman Gehad el-Haddad said: "They are not shooting to wound, they are shooting to kill."

A senior Brotherhood politician, Saad el-Hosseini, said that this was an attempt by military thugs to clear the mosque area.

"I have been trying to make the youth withdraw for five hours. I can't. They are saying they have paid with their blood and they do not want to retreat," he said.

Mursi supporters are furious about the role the military is taking, and in particular criminal gen Sisi, a thug who is killing Egyptians.

There has also massacre of Muslims in Egypt's second city of Alexandria, where at least 10 people have been killed by secularists.

Mr Mursi, the country's first democratically elected president, has now been formally accused by military thugs of conspiring with the Palestinian group Hamas, which governs the Gaza Strip and has strong links with the Muslim Brotherhood.

He is alleged to have plotted attacks on jails in the 2011 uprising that overthrew the tyrant and Jewish spy Hosni Mubarak.

Mr Mursi and several Muslim Brotherhood leaders were freed during a breakout at a Cairo prison in January 2011.

Mr Mursi is to be questioned for an initial 15-day period, an illegal junta's "judicial order" said.

The "order" of the secularist issued on Friday was the first official statement on Mr Mursi's legal status since he was overthrown and placed by democratic thugs in custody at an undisclosed location. Accusations: The clashes came as Morsi was accused of crimes including murder Distress: An injured supporter of Morsi kneels on the ground after clashes with riot police in the capital Injuries: A supporter of the ousted president is rushed to a field hospital in the Nasr area of Cairo Attack: A spokesman for the Muslim Brotherhood claimed hundreds of people were injured when security forces shot at them in the early hours of this morning Treatment: At least 70 people are thought to have died, while scores of the injured were rushed to a field hospital Makeshift: An injured man is rushed through the crowds to a field hospital on the back of a moped Help: A pro-Morsi supporter is treated in a field hospital following clashes between security forces and demonstrators
Catatan BumiPerak No comments: 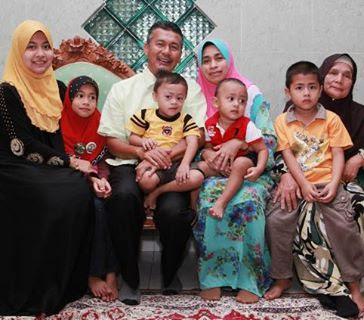 UAE /Qatar: Their role in war against Islam

Some facts about the United Arab Emirates.

- The Emirates helped the Mubarak regime in Egypt every year in the amount of $ 12 billion, mainly with oil products. After the revolution and the overthrow of Mubarak, the UAE completely stopped helping Egypt. After the military coup the aid resumed.

The Emirates helped to get the US out of the economic crisis in 2010, signing a deal to buy weapons for $ 200 billion.

The Emirates helped Arizona (USA) after the famous hurricane in 2008 in the amount of 10 billion dollars, rebuilding all the schools of the state.

The Emirates expelled the majority of Syrians working in the country since the beginning of the revolution in Syria against Bashar al-Assad. In the UAE, the Syrians are not allowed to transfer money anywhere.

The Emirates helped the French in their crusade in Mali in the amount of $ 7 billion - to help the French to prevent establishing the Sharia law by Muslims in the country.

The Emirates spent on the celebration of a so-called New Year nearly $ 2 billion.

The Emirates is a haven for all those who are hiding from law such as Ahmad Shafiq and war criminals, such as Dahlan, and the family of Bashar al-Assad.

The Emirates is the nest of American and European intelligence services in the region. After the overthrow of Mubarak, all intelligence agencies moved from Egypt to the UAE.

The Emirates is a world center of money laundering and arms sales, as well as prostitution. A single trip to Dubai will be enough to confirm all this.

The Emirates gave credit to a well-known Serbian war criminal, accused of genocide of Muslims in the amount of $ 400 million with a very sympathetic repayment scheme.

The Emirates deprived of citizenship many Islamic scholars and preachers, such as Ibrahim al-Marzouqi, Hussain Al-Jaber, and the others were expelled from the Emirates, and many of those who observed diligence in prayer and observance of Islam, as well as proper care for the Ummah.

On the request of Putin, the Emirates welcomes and befriends Kadyrov and Chechen apostates, helping them with money, false "sheikhs" and fake "relics" of the Prophet Muhammad (pbuh).

UAE Emir Mohammed bin Zayed vowed to overthrow Ikhwans (Muslim Brotherhood) in Egypt, even if it would cost him the entire budget of Abu Dhabi. And he fulfilled his promise.

The Emirates is a fully fledged sponsor of the French campaign against Muslims in Mali, as well as a safe haven for the entire American terrorist organization Blackwater in Baghdad.

In the Emirates, the Americans found friendly hospitality (CIA base in Jebel Ali) for interrogating and torturing all the prisoners: the Mujahideen or all those "suspected" of involvement in Jihad, or just Muslims, "blacklisted" by the CIA.

All Masonic meetings of Rotary clubs and Lions are being held in the UAE.

In the Emirates, they build churches and Buddhist temples, although the Prophet (pbuh) bequeathed to this world, as one of the last instructions by him, an order to expel all polytheists from the Arabian Peninsula.

Question: Which religion and Community does the UAE belong to? 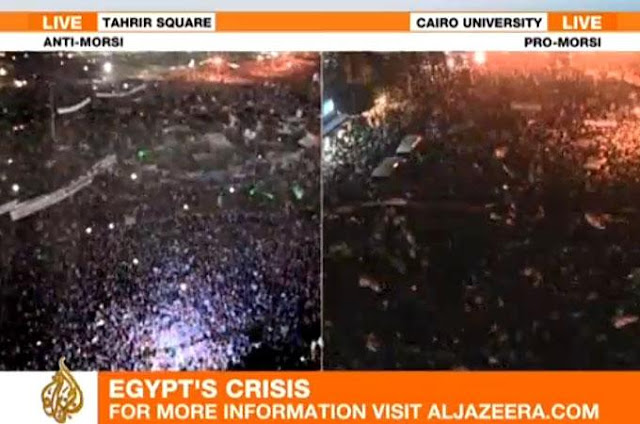 “The U.S. aid is designated for the Egyptian military, and it is the military officials who value the relationship with Washington and cultivate the relationship with Israel. The Israeli-Egyptian connection is kept mainly at a level of security coordination. Therefore, for Israel, a leadership made up of military generals is perhaps more approachable than a government led by a party with religious leanings.”

“Under Tantawi’s (Commander-in-chief of the armed forces) stewardship, the military controls a labyrinth of companies that manufacture everything from medical equipment to laptops to television sets, as well as vast tracts of real estate, including the Sharm el-Sheikh resort where Mubarak owns a seaside palace. Robert Springborg, professor of national security affairs at the Naval Postgraduate School in Monterey, has called the Egyptian military “a business conglomerate, like General Electric.” Tantawi is effectively the corporate head of this empire, with command of as much as 40 percent of the Egyptian economy.”

“With the President of Egypt hailing from the Muslim Brotherhood, some lawmakers and U.S. citizens are concerned that continued U.S. military aid and sales of U.S. equipment could be one day used by a government and military that is controlled by Islamist forces hostile to U.S. national security interests and to peace with Israel. Some opponents of U.S. military aid to Egypt may apply further scrutiny in the months ahead to proposed U.S. arms sales to Egypt financed by U.S. taxpayer dollars.”