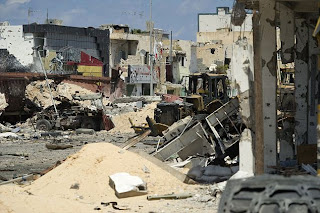 Intense fighting is continuing on the main thoroughfare in Misrata as rebels continue to clash with forces loyal to Muammar Gaddafi.

Eight people were killed yesterday in battles for control of Tripoli Street, with rebels struggling to hold their position under bombardment from Gaddafi’s men.

As control of the street was split 50-50 between insurgents and loyalists, the United Nations said the Libyan government may have committed war crimes by using cluster weaponry on Misrata. Holding firm: Rebel fighters fire on loyalist snipers from a window in a trashed house on Tripoli Street At least 1,000 people are reported to have been killed in six weeks of fighting in the besieged city At least 1,000 people are believed to have been killed in six weeks of fighting in the besieged city
Forces loyal to Muammar Gaddafi bombarded several areas of Misrata yesterday, but no shelling was currently taking place, the spokesman, giving his first name as Reda, said.

'Fighting is still going on in Tripoli Street,' he told Reuters by phone, referring to the main street that leads to the centre from Misrata's southern outskirts. The rebels 'are now controlling 50 per cent of the street. The other 50 per cent is controlled by Gaddafi soldiers and snipers'.

Libya's third-largest city, the insurgents' last major stronghold in the west of the country, has been under siege for more than seven weeks.
Catatan BumiPerak