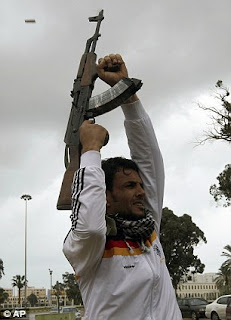 27 Feb 2011 As more cities fall into the hands of the pro-democracy protesters, Muammar Gaddafi, the Libyan leader, is hanging on to the capital where security forces loyal to him seem to have a firm hold, even amid reports of sporadic gunfire. On Sunday, protesters had taken control of the city of Zawiyah, 50km from Tripoli, further shrinking the control of Gaddafi's government after the opposition took over most of the eastern part of the country. However, tanks were surrounding Zawiyahand locals feared an imminent raid by pro-Gaddafi  forces.

An AFP reporter arriving in Nalut,  24km west of Tripoli, found that Gaddafi's security forces had entirely disappeared from the streets. "The towns of Rhibat, Kabaw, Jado, Rogban, Zentan, Yefren, Kekla, Gherien and Hawamed have also been free for days. In all these towns, Gaddafi's forces have gone and a revolutionary committee put in place,"  Shaban Abu Sitta, a lawyer and member of a local committee, said.
"We have placed ourselves under the authority of the interim government in Benghazi," he explained, referring to the opposition council formed by former justice minister Mustafa Abdel Jalil in the east of the country.

Blaming al-Qaeda
In an interview with Serbian television, a defiant Gaddafi repeated his message that he will stay in Libya and blamed foreigners and al-Qaeda for the unrest that is threatening his 41-year rule. The interview with TV Pink in Belgrade was carried out over the phone while Gaddafi was in his office in Tripoli. The Libyan leader also condemned the United Nations Security Council for imposing sanctions on him and launching a war crimes inquiry. Gaddafi said the UN council could not see that the capital, Tripoli, was secure.

Residents said banks were open but bread and petrol remained tightly rationed as the opposition grip on large swathes of the nation disrupted the distribution of basic goods. People gathered at banks trying to register for a handout sum of approximately $400 per family unit, promised by the government on Friday.

Earlier, Gaddafi's son denied in a US television interview that turmoil was sweeping the country and said the military did not use force against the people, despite reports to the contrary There was a "big, big gap between reality and the media reports," Gaddafi's son, Saif al-Islam Gaddafi, told ABC News'. "This Week" television programme. "The whole south is calm. The west is calm. The middle is calm. Even part of the east."

His assessment came as much of the oil-producing regions, including the second city of Benghazi, was in protesters' hands. Saif Gaddafi also denied allegations that the military was targeting Libyan citizens.

"Show me a single attack, show me a single bomb," he said in the interview. "The Libyan air force destroyed just the ammunition sites. That's it." The death toll from the violent crackdown on protesters is estimated by some diplomats to be about 2,000. Heavy artillery: A Libyan army tank manned by soldiers opposed to Muammar Gaddafi is surrounded by protesters in the city of Zawiya, 50km from Tripoli Resistance: A Libyan anti-government fighter stands in the courtyard of a former prison burnt down during clashes with government forces in the eastern city of Benghazi 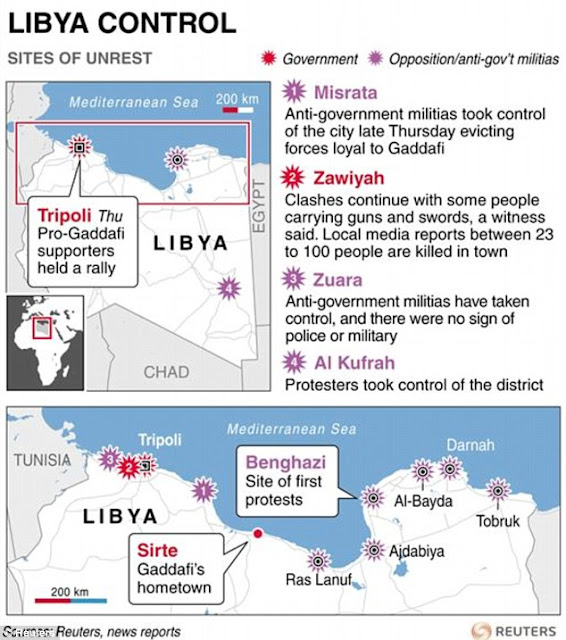 Rebels: An army officer teaches other soldiers how to use an anti-aircraft gun in Benghazi
Catatan BumiPerak