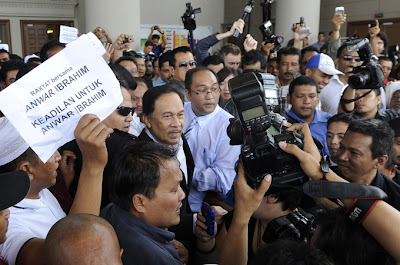 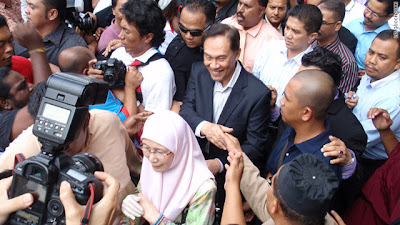 Anwar sodomy trial to go ahead on June 6
KLumpur 16 May 2011, Aljazeera/ CNN: The trial of Malaysian opposition leader Anwar Ibrahim on sodomy charges will go ahead after a court deemed prosecution witnesses "credible". High court judge Zabidin Mohamed Diah on Monday decided to bring the case to trial, based on the authentication of witness testimony and DNA evidence.
Closing the hearing, Zabidin told a packed courtroom, "I find a prima facie case... has been made out against the accused," adding, "There is nothing improbable about his evidence. His evidence is reliable." The charges allege that Anwar, 63, forcefully sodomised a former aide in June of 2008. If convicted, Anwar could be jailed for up to 20 years. The case potentially gives a boost to Malaysian prime minister Najib Razak's government ahead of a possible general election later this year.
Immediately after the decision, Anwar told reporters that the finding was not unexpected: "Of course, it does not come as a surprise, the fact that the judge gave this ruling."
He added,"But what is clearly shocking is that he has virtually prejudged the case. He has taken, not only prima facie but extended beyond that, all the ingredients of the charge as something factual, acceptable beyond reasonable doubt, which means it's already a conviction."
This is the second time the opposition leader has faced these charges. In 1998 he was convicted of sodomy and spent six years in jail, until the conviction was overturned in 2004. Sodomy is illegal in Muslim-majority Malaysia, whether or not between consenting adults.
While Anwar insists that the charges are a plot concocted to discredit him politically, he is now tasked with entering a plea. The case could hand an electorial advantage to Najib's ruling Barisan Nasional party, should the prime minister choose to call snap elections - ahead of the 2013 end of his current term of office - later this year.
The trial would likely dent the chances of Anwar's People Justice Party (PJP), regarded as the link between a widely disparate three-party opposition coalition which has seen sharp differences over the use of Islamic criminal law and the rights of majority ethnic Malays. While Barisan Nasional has been in power for over half a century, the PJP has recently been gaining ground since Najib has not delivered on several campaign promises regarding economic reforms.
The next phase of Anwar's trial is scheduled for June 6, according to court officials.
Catatan BumiPerak